Outside the venue in Ankara where the Russian ambassador to Turkey was shot, on Monday, December 19.

A gunman reportedly stormed into the building where the official was attending a Russian photo exhibition and opened fire.

Russian President Vladimir Putin offered his condolences following the murder of Russia’s ambassador to Turkey, Monday. Speaking from Moscow Putin said it was “certainly a provocation aimed at disrupting the normalisation of Russian-Turkish relations and at derailing the peace process in Syria, which is actively promoted by Russia, Turkey, Iran and other countries interested in the settlement of the Syrian conflict.”
Video In Russian, Use CC function for your language

Video: Germany: Mobile phone captures aftermath of Berlin Christmas market incident
At least nine people were killed and many others injured after a truck crashed into the Berlin Breitscheidplatz Christmas market on Monday evening. The driver of the truck is reportedly detained and the co-driver died.

Video: English Version – ‘We need to know who gave the orders’: Putin comments on ambassador assassination in Ankara

@WarfareWW Video of an attack on #Russian ambassador in #Turkey #Ankara pic.twitter.com/xXo1KmP3Ea 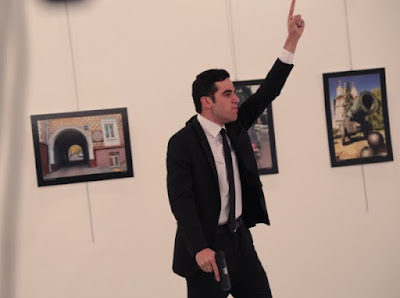 Faster than a speeding bullet….the world analyses and solves the latest False Flag Hoax.  This time, according to the reliably unreliable BBC “Voice of Satan” the Manchurian patsy shouted “Alahu Akbar” and slogans about “Remember Aleppo” as he shot the Russian Ambassador at an art gallery exhibition (about Russia) in Turkey.  According to the respectfully gleeful report in “Voice of the Perps”, New York Times…the Russian Ambassador was shot from behind (It’s what they doooooooooo).

Conveniently killed immediately afterwards in a “gunfight”, the gunman allegedly got into the exhibition bearing Turkish Police ID (did they have to kill an entire busload of Turkish soldiers the other day to get one ID?)

The dubious source blog Veterans Today is saying that Netanyahu was behind it and is in cahoots with Turkey’s Erdogan.  No.  The Mossad is behind it…they’re running a bit behind on their assassinations these days.  And the goal is the Ziofascist imperative to break up the Turkish/Russian recent geopolitical détente. As a side order…it serves as a distraction to the Electoral College defeat today of the Ziofascist wet dream of getting Hillary elected in the USA…A Trump Presidency finally brings to an end the use of the United States as Israel’s personal battering ram against the world.

From VeteransToday – The ambassador, Andrey Karlov, was gunned down as he was about to deliver a speech on the opening of the exhibition “Russia in the eyes of Turks.”

The perpetrator, who was wearing a suit and a tie, shouted ‘Allahu Akbar’ (‘God is great’ in Arabic) during the attack, AP reports, citing their own photographer. The attacker also said several words in Russian, according to the news agency, and damaged several of the photos at the expo.Turkish NTV broadcaster says that three other people were also injured in the attack on the ambassador. Hurriyet newspaper, citing their own reporter, says that the perpetrator also fired warning shots in the air before targeting Karlov.

The gunman got away, if you can imagine that.  They then gunned down a patsy, probably a Kurd, it’s Mossad false flag 101.  They have to get better at this, they are being all too predictable – our own Kevin Barrett predicted something like this was going to happen two days ago.

Timed to coincide with the UNSC vote on Aleppo peace keepers, this assassination pushes the real news to page two.

Our sources indicate that this attack against the Russian ambassador to Turkey was perpetrated at the orders of Israel’s Netanyahu and done with full cooperation of Turkish authorities, heating up things to push Trump into a war footing at day one.

The gunman shouted ‘Aleppo’ as he pulled the trigger. It is almost inevitable that he will be identified as a Kurd, probably a Syrian Kurd.

Make no mistake, this was a Mossad hit, the killer stood over the fallen ambassador and pumped 8 shots into his body.

This is Sarajevo, 1914 all over again, a Zionist-sponsored gunman kills a major governmental figure in order to destabilise an entire region and plunge it into war.

The above AP photo is clearly staged in order to enrage the Russian people – what sort of killer stands there holding a pistol and gloating? This is an iconic image crafted specifically for the Russian audience.

However, this time there is one crucial difference – in 1914, many in Austro-Hungary were absolutely clamouring for war on Serbia, in particular, Chief of Staff Conrad von Hotzendorf, therefore the death of Franz Ferdinand was like throwing a match into a bucket of petrol. Today, Russia does not want a war, there are no von Hotzendorfs in Putin’s inner circle pushing for war, therefore we can only hope that this Zionist ploy does not have the same outcome as 1914, which led to tens of millions of deaths and the destruction of the Empires of Europe, most bloodily the Russian one, to be replaced by the Zionist ‘Bolshevik’ regime that went on to murder at least 100 million Russians.

Of course, Putin and the Russian leadership do not need such a history lesson, they, like almost all Russians, have not forgotten what the Zionist Communists did to them. Furthermore, they possess far cooler heads than the Habsburg court did in 1914, therefore we can only hope their reaction to this atrocity is far more considered than the Austro-Hungarians in 1914. Netanyahu can count himself lucky that it isn’t von Hotzendorf sitting in Moscow in command of thousands of thermonuclear missiles.

Netanyahu is playing a most dangerous game, he is playing the Turks, the Russians, the Americans, the Germans and half a dozen lesser powers off against each other, he seems to think that spreading distrust and hostility, sowing the seeds of war, will enable the Zionist Likud that runs Israel to achieve it’s ambitions. He may, however, be sowing the seeds of his own destruction, and he would take Israel down with him. Read More