Poll: More Americans Dissatisfied With Government Than At Any Time Since 9/11

Two thirds believe Federal government is too big and powerful

A new Gallup poll indicates that more Americans are hacked off with the US system of government than at any time since the terrorist attacks on September 11, 2001.

Sixty Five percent of voters indicated that they were dissatisfied with the effectiveness of government, an increase of five points on last year, and a new high above the 2012 figure of 64 percent. 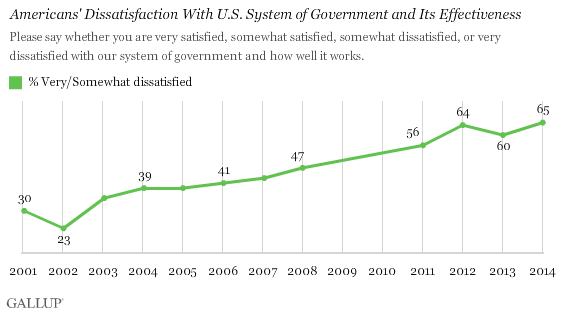 The record high is a full 42 percent higher than it was at the height of the Patriotism infused year of 2002, following the 9/11 attacks, when dissatisfaction with government stood at just 23 percent.

The figures show that in just 12 years, dissatisfaction with the government has soared from fewer than one in four Americans to almost two-thirds.

The poll also noted that the same amount of Americans are unhappy with the size and power that the Federal government now has. 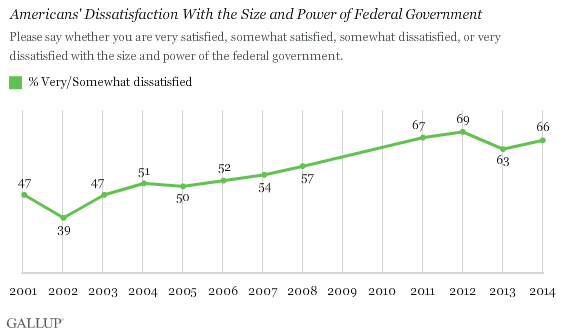 Just one week before the scheduled State of the Union address, two thirds of Americans believe that the government has grown too big and become too powerful. In the last nine years, the trend has jumped from an even 50 percent split to a sixty-six percent majority. Between 2008, when Obama was inaugurated, to 2011, the measure of dissatisfied Americans jumped by a full 10 percent.

Gallup also notes that “even a slight majority of those in his [Obama’s] own party are generally dissatisfied with how government is working.”

A separate Gallup poll earlier this month also found that the top problem facing the country according to voters is dysfunctional government. A similar AP survey found that a whopping 70 percent of Americans have absolutely “no faith” in government to make progress on key issues.

A new USA TODAY/Pew Research Center poll shows that an overwhelming majority of Americans who paid any attention to the president’s promises to reign in the NSA last Friday do not believe it will do anything to protect them from continued government surveillance.

Only half of the respondents said they had paid any attention to what Obama said during the speech, yet of the half who did, 73 percent of them think his promises of reform will amount to nothing.

By nearly 3-1, 70%-26%, Americans say they shouldn’t have to give up privacy and freedom in order to be safe from terrorism.

The Pew poll also noted that 53 percent of respondents disapprove of the government’s bulk collection of Internet and telephone metadata. This majority equates to three in four Americans who do not believe Obama will do anything to protect their privacy. The Pew poll tallies with majority opposition to NSA spying found in recent Washington Post (66%) and AP (60%) polls.

Along with record low approval ratings for Congress, collectively these figures show that a bigger majority of Americans than ever before are disgusted with their government and have no faith that it can function in their interest.

Steve Watson is the London based writer and editor for Alex Jones’Infowars.com, and Prisonplanet.com. He has a Masters Degree in International Relations from the School of Politics at The University of Nottingham, and a Bachelor Of Arts Degree in Literature and Creative Writing from Nottingham Trent University.